Earlier this month, PogoWasRight.org reported on a case involving a teenager we called “Kenny.” Kenny had asked for this blogger’s help getting IMDb to remove a fake page about him.  The fake page on IMDb had his real name and real location, but claimed that he had acted in a movie, been involved in producing a movie, and was involved in an online acting school that could be accessed on YouTube.  None of that was true.  All of the movie-related “credits” were the fictional creation of one of the teen’s friends, who had also created an IMDb page about himself that also listed false credits. The teens were about 14 at the time Kenny’s friend created the false pages.

Now an older teen, Kenny was troubled by the false page with his real name and location and feared it could harm his reputation and future. So following their directions, Kenny contacted the Helpdesk to request removal of the fake page, but he got no help.  IMDb staff repeatedly refused to remove the page, claiming that it contained “live” and “accurate” credits and therefore they could not remove it as a matter of policy.

Last week, Kenny received a reply from his state attorney general’s office. It contained a response from IMDb corporate counsel with welcome news – they were removing the problematic page.

To be clear, IMDb did not admit making any mistake. In fact, their version of Kenny’s contacts with them is not wholly consistent with the records and proof Kenny provided to this site.

Specifically, IMDb claimed that Kenny’s initial contact was simply a request to remove the page because he hadn’t authorized it.  That was an accurate summary. But IMDb then claimed that Kenny replied that “he never did any movie stuff” but “did not provide any support that clarified what that statement meant, or that he was not involved with the films at issue.”

So let’s take a look at what Kenny told them. 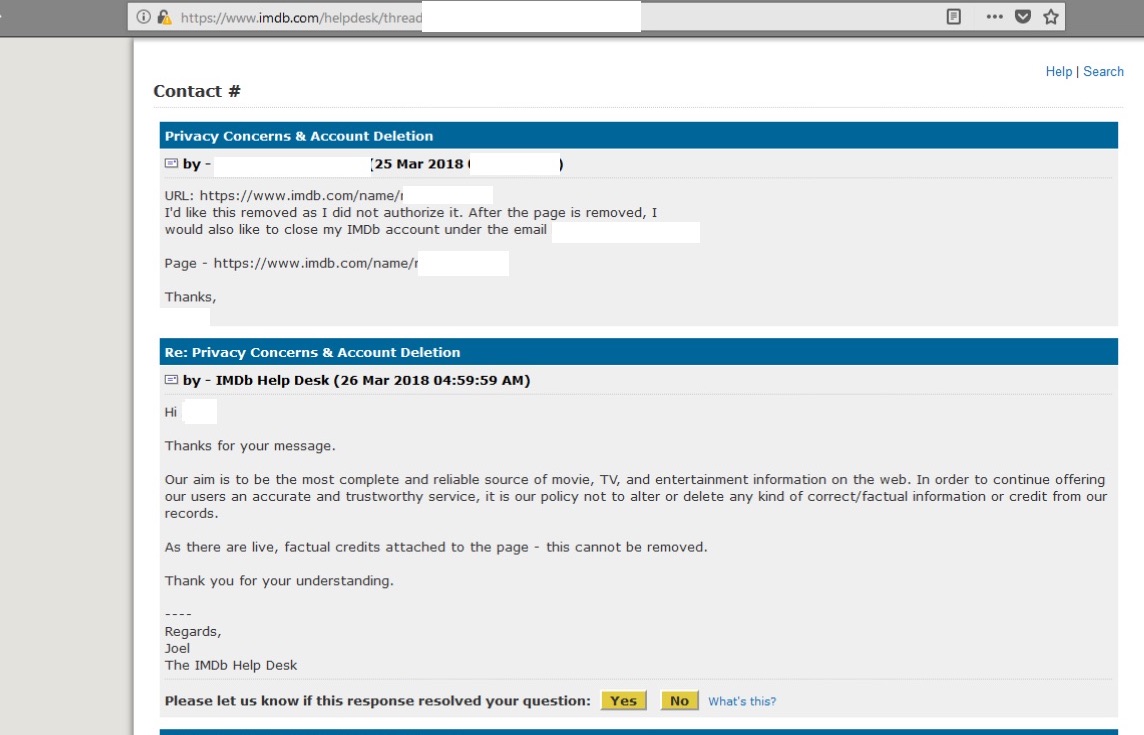 In his first request, Kenny simply asks for removal of a page he never authorized.  IMDb responds that there are “live, factual credits attached to the page,” so as a matter of policy, the page cannot be removed. 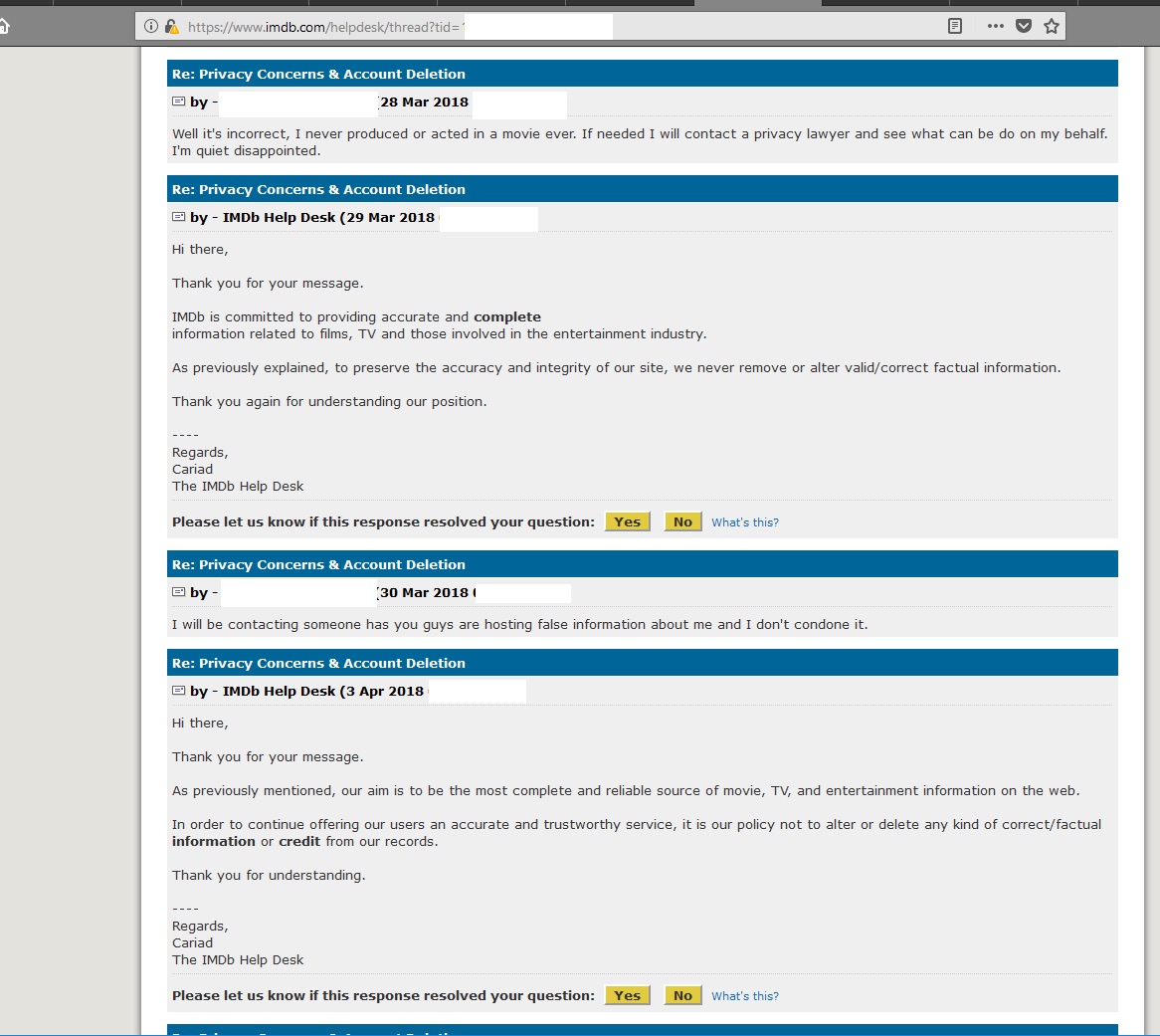 Kenny replies to them, in part, “Well it’s incorrect. I never produced or acted in a movie ever.”

IMDb claims that the statement is not clear enough?  Seriously? When they repeat the “live and factual credits” excuse, Kenny replies that they are “hosting false information about me and I don’t condone it.”   They reply again that they will not remove the page because it has correct/factual information or credit from their records. 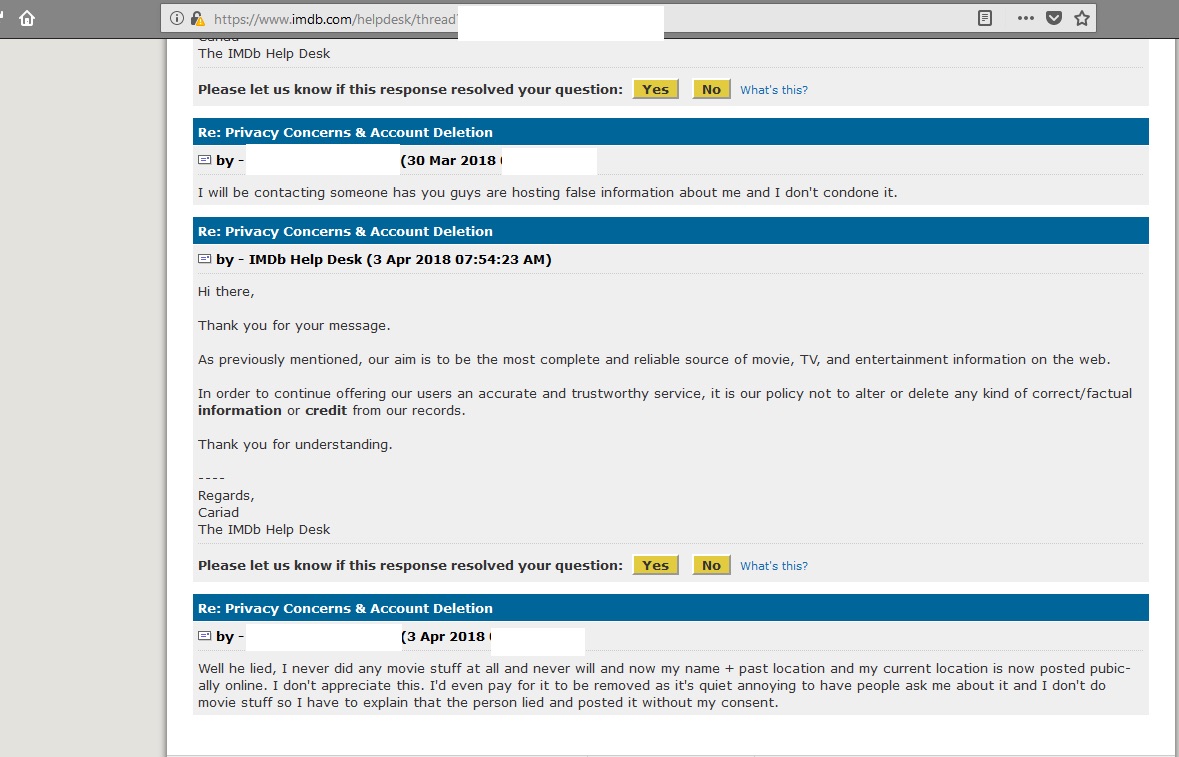 Kenny makes one last attempt, telling Helpdesk “Well he lied. I never did any movie stuff at all and never will and now my name + past location and my current location is now posted publically (sic) online. I don’t appreciate this. I’d even pay for it to be removed as it’s quiet (sic) annoying to have people ask me about it and I don’t do movie stuff so I have to explain that the person lied and posted it without my consent.”

How much clearer could the teen have been? And how were they supposedly researching these so-called “credits” when they didn’t exist at all?

According to their corporate counsel’s letter to the state, when IMDb went to investigate after hearing from the state, they found that all sites, social media channels, and YouTube videos related to the films listed for Kenny had been removed or deleted. As a result, IMDb could not re-verify the credits. As a further result, they indicated, they had removed the page from the site.

Those “credits” never existed except as a joke and any joke pages on YouTube or elsewhere were gone before IMDb Helpdesk staff ever attempted to “verify” the “credits.” So how did multiple Helpdesk employees allegedly research and supposedly verify that there were “factual and live credits?”

That’s what IMDb needs to really investigate:  whether its employees are living up to the promise IMDb made to consumers that it would promptly investigate and fix errors.  Because if IMDb is just blowing smoke and claiming that their employees investigate when they really don’t, then the FTC should really go after them for deceptive claims.

In any event, PogoWasRight is pleased that this site was able to help Kenny achieve the desired result, and gives a big thumbs up to his state attorney general’s office for their prompt investigation and assistance. Kenny will also be writing to them to thank them.  But for now, we’ll end this report with the note Kenny sent me:

Thanks so much Dissent, I was feeling so clueless on what to do about having the false information removed when IMDb claimed it was factual. I’m glad you helped me stand up to such a big company and supported me every step of the way. I can’t thank you enough!